The Principles and Biomechanics of the Rigo Chêneau Type Brace

By Grant I. Wood and Manuel Rigo.

All scoliosis braces bearing the name “Chêneau” as part or all of their designation share a common history, originating in 1979 with the Chêneau Toulouse Munster (CTM) brace, developed by Dr. Jacques Chêneau and Professor Matthias of Munster. Since then, several variations of this brace have evolved to enhance support/correction of scoliosis in three dimensions. Design features based on the Rigo classification of scoliosis and further modifications by the co-author led to the Rigo Chêneau type brace. This is a dynamic brace, with expansion rooms to accommodate tissue migration, growth and breathing movements. The brace by the authors is hand-made and customized to the curve pattern, skeletal maturity, flexibility and structural component of each individual. It applies both de-torsional forces and three-point pressure systems to improve spinal alignment in all three planes. It is also designed to work synergistically with Schroth physiotherapeutic scoliosis specific exercises to optimize effectiveness of a conservative approach.

The purpose of this chapter is to share with scoliosis professionals the biomechanics and design of the Rigo Chêneau brace. A historical background of the Rigo Chêneau brace is provided to show the evolution and improvements in it over the last three decades, particularly changes outlined since 2005, which have led to good fit and function. Equally important to the end result is good patient follow-up care and brace quality control by the referring MD, physical therapist and orthotist. 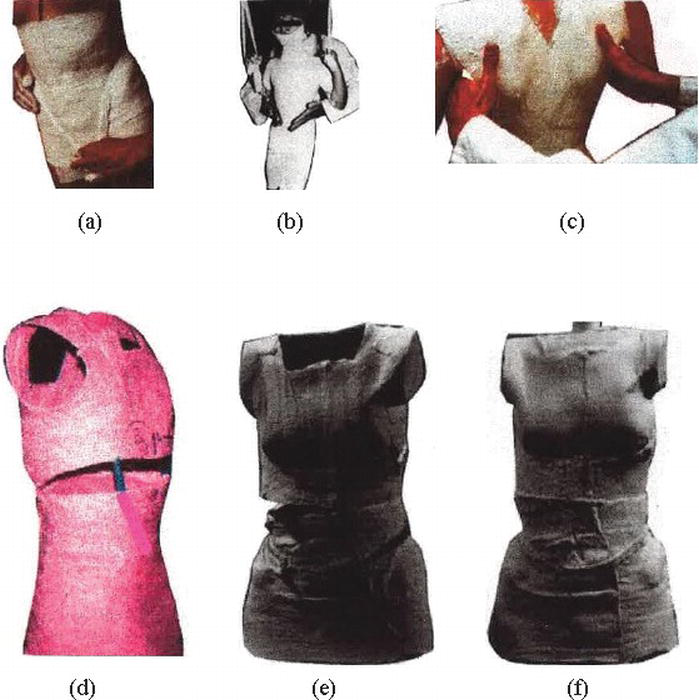 The three-curve and four-curve casting technique for providing optimal fit at the iliac crests in (a) and (b). The orthotist elongates the patient by applying an extension force at the axillas in (c). The negative cast cut-and-position technique of correction and alignment of the Chêneau brace in (d)–(f) [6]. 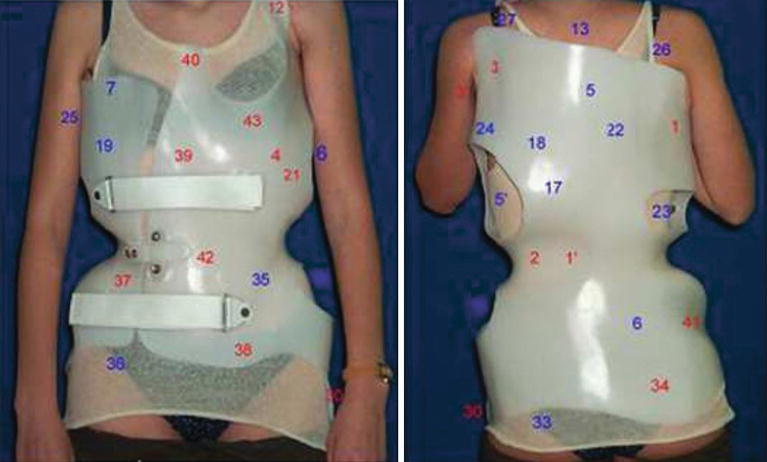 An old style, four-curve handmade Chêneau brace from 1999, Malaga, Spain. A numbering system was utilized by Dr. Chêneau to identify all the pressure and expansion areas [2].

In the late 1990s, Dr. Manuel Rigo (MR) of Barcelona found that these two designs were insufficient for the distinct types of curve patterns. As a result, the King classification was adapted for the Chêneau brace for a few years. However, MR found that there were brace failures with the King classification when it was used for brace design. The King classification was developed for surgeons to decide on the level of spinal fusion during surgery, and not specifically for bracing. Because of these failures, MR developed a classification to guide the brace design [3], which was first presented by MR et al. in 2010. This was presented later by Grant Wood at the International Society for Prosthetics and Orthotics (ISPO) of 2010 in Leipzig, Germany [4].

Since the original brace in 1979, various Chêneau brace derivatives were developed. The first author of this paper, GW, began in 1995 with the original Chêneau brace, under the training and teachings of Dr. Chêneau. Dr. Chêneau and Dr. Rigo were providing brace modification workshops in Barcelona and Sevilla Spain during the late 1990s. During these workshops, the shape of the original Chêneau brace changed significantly, mainly through modifications suggested by MR, including significant increases in the size and locations of plaster expansion zones and pressure areas. These modifications led to the familiar large flowing and asymmetrical shapes that are more commonly seen today.

In 2012, due to the wide range of brace standards and various levels of quality of Chêneau braces using the Rigo principles, GW, the main author, named his brace according to his own methodology and hand modifications aimed at addressing the complexities of the original design, and named the brace Wood Chêneau Rigo (WCR) brace.

The WCR brace evolved from the original Chêneau brace (1995), which was subsequently refined using the Rigo classification of scoliosis, and hand modifications aimed at addressing the complexities of the original design.

The WCR brace incorporated the best of modern CAD CAM and “old school” hand modifications. Generally speaking, technical advances in brace design and production have increased productivity, albeit at the cost of individualization to each patient’s anatomy, curve pattern, and preferences, the lack of which can degrade the brace’s fit and function. For this reason, the WCR brace has, since its inception in 1995, applied the most critical patient modifications by hand.

The differences between the original Chêneau brace and the author’s Chêneau-Rigo handmade type brace are the following:

In 2017, due to the multiplicity of versions and variations in the quality of the Rigo Chêneau type brace, Dr. Rigo, Grant Wood and Luke Stikeleather founded the Association of Rigo-Chêneau specialists (ARCS), which has the goal of maintaining and providing a standard of quality and education for orthotists who have practiced these principles.

The Rigo Chêneau type brace is a corrective orthotic device which must be individualized to each patient’s specific curve pattern and other unique body characteristics.

It is not an orthopedic product but rather a corrective concept for the specific use in the conservative treatment of scoliosis.

A 3D scan or handmade cast is used to capture the patients exact body shape and anatomy. The scan or cast then produces a positive mold that is rectified to provide a 3D corrected positive mold, which in turn is used to adapt the thermoplastic to provide the finished brace.

A WCR brace modified and fit by the main author, shows the left lateral, anterior, posterior and right lateral views of the patient with 3D correction in a C2 type brace using the Rigo classification of scoliosis [3].

The expansion areas, or rooms, are not windows where a simple hole is cut out of the plastic, but instead, actual buildups of significant space created in the original positive mold. They are generally located in the concavities and prominences of the scoliotic body. Expansion rooms are for tissue migration, growth and breathing movements, thus converting a rigid brace into a dynamic brace [5].

The Rigo Chêneau type brace is a thermoplastic brace with a ventral opening and Velcro closures. It follows many of the original 3D concepts of Dr Chêneau, and utilizes the Rigo classification of scoliosis and brace design.

This chapter reviews the biomechanics and breathomechanics of all three planes of the body. The transverse thoracic section demonstrates improvement of the thoracic hypokyphosis. The diagram of patient elongation describes how specific pressure points simultaneously provide for elongation, derotation and lateral curve correction. The pelvis and trunk translations are described, and shown to outline how the Rigo Chêneau brace overcorrects body posture to allow an improved clinical presentation for A-type, B-type, C-type and E-type Rigo classification brace types (Figure 4). 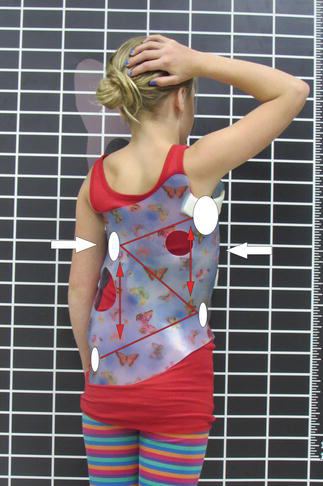 In-brace correction of the Cobb angle has been the gold standard for the measurement of successful bracing. This patient’s curvature was reduced from pre-brace 21° Cobb angle to an in-brace Cobb angle of less than 5° in a Rigo Chêneau type brace. The pre-brace X-ray shows the pelvis translated to the left and the trunk to the right. The in-brace X-ray shows the pelvis corrected to the right and the trunk balance to the left. 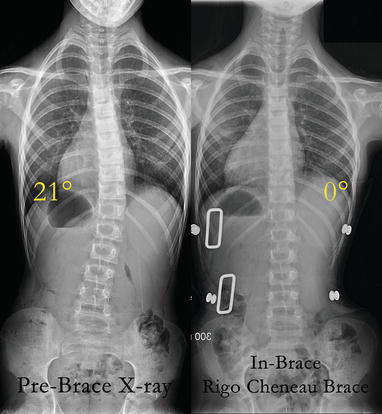 These high and low targets for in-brace corrections depend on several factors, including the Rigo classification brace type, curve pattern, skeletal maturity, flexibility, and the structural component of the scoliosis, which limits correctability. This last factor is particularly important to the effectiveness of the Rigo Chêneau brace which is supposed to work through the detorsional forces and the amount of the mechanical torsion.

Regional and local derotation in the transverse plane.

Three-point pressure systems for the best possible alignment and balance in the frontal plane (See Figure 6).

The best possible alignment and balance in the sagittal plane. 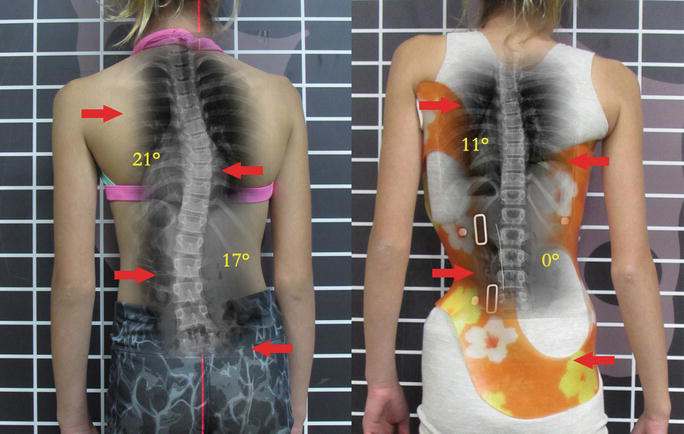 The expansion is noticeable and the volume depends on the body morphology. Expansion areas or rooms are not just to be there to be filled at the time but to define the orientation and shape of the contacts. An essential function of the brace design is to produce the right body reaction during breathing (Figures 6 and 7). 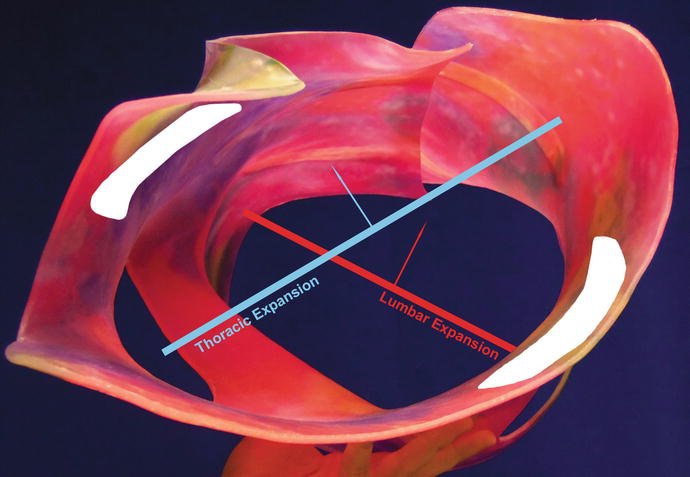 These forces are needed to bring the patient into optimal coronal plane correction through a corrective three-point pressure system and to bring the anterior prominence to a higher level.

The orientation of the dorsal and ventral pads is different. The ventral pad is a little more frontally oriented compared with the dorsal pad which is a little more sagittal orientated. The two main forces can be combined into one main force vector. These vectors act as a pair of forces for derotation. The ventral component is always the major one, and the dorsal is the minor one. That way, the ribs and coupled spine will derotate and translate backwards (Figure 8). 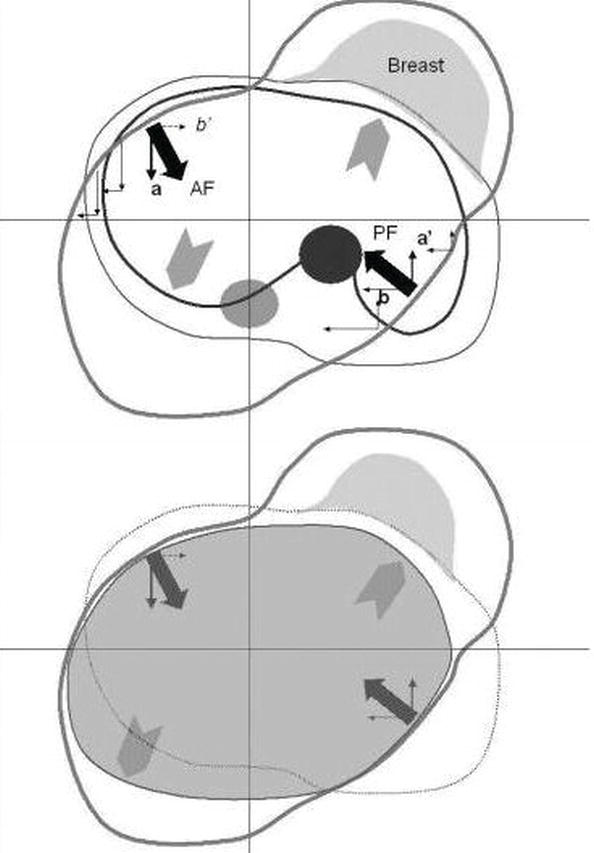 The sagittal diameter increases during rotation, bringing the spine out, rounding the back, thus improving the morphological flatback.

The two forces need to be at the same transversal level to be effective. Ventral and dorsal prominences are for different transversal levels. Pushing on them is not enough to get correction.

The intention is to produce a better physiological shape, where the physiological shape in the sagittal plane is more or less pronounced, depending on the pelvic structure (i.e. the pelvic incidence) (Figure 9). The normalization of the sagittal configuration of the spine is not possible in most cases due to structural lordotization, and any kyphotizaton of the main thoracic region at the expense of spinal flexion will just increase the proximal and distal compensatory kyphosis. 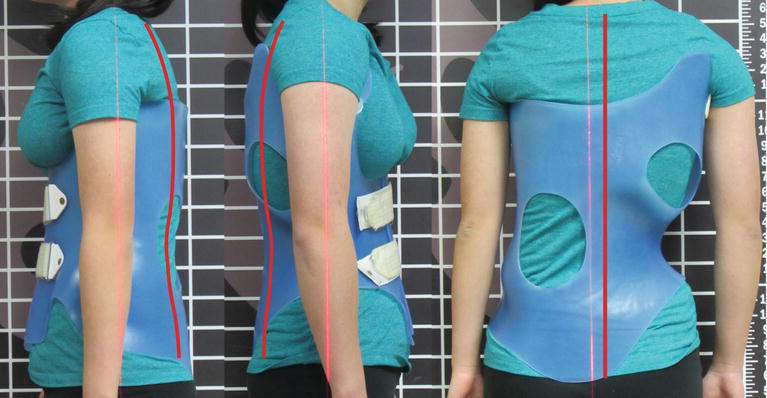 This figure shows the same patient on her left and right sides, with two different sagittal plane shapes on each side. The patient is wearing a WCR brace for the treatment of a left thoracic and right lumbar B1 type scoliosis [3].

With 3D corrections, the priorities are; first, to reduce the Cobb angle, second, to reduce rotation, and third, to reduce morphological flatback.

The contributions of MR are the description of the biomechanical principles of the brace design and a creation of the specific scoliosis classification developed to help to standardize the brace design and construction. This classification also correlates with Schroth physiotherapeutic scoliosis specific exercises (PSSE) both according to the Barcelona School (BSPTS) as well as the original German Schroth school according to Katharina Schroth [5].

The Rigo-Chêneau type brace and the Schroth PSSE address the 3D biomechanics of the deformity in the similar way. The increased expansions in the brace correspond to the Schroth PSSE so-called de-rotational breathing mechanics, which strive to expand the collapsed areas of the trunk affected by scoliosis, aiming at correcting the horizontal (axial) plane of the body. Specific pressure areas in the brace and Schroth PSSE principles work hand in hand to correct the frontal and sagittal planes of the body. That is why the Rigo Chêneau type brace and Schroth PSSE are considered to be a 3D conservative treatment of scoliosis.

This three-dimensional correction cannot be achieved using classic braces, commonly used to treat scoliosis for decades, because their biomechanical design generally does not address the rotational aspect of scoliosis.

The Rigo classification of scoliosis and brace design is intended to categorize scoliosis curve patterns. The objectives of the Rigo Chêneau type braces are to improve the clinical presentation of the patient and to improve or prevent progression of the scoliosis. Rigo Chêneau type braces, including the Wood-Chêneau-Rigo braces, were outlined in this chapter. An orthotist must provide optimal fit and function of the brace prescribed by the referring physician. Adherence to certain basic design principles and close follow up by the orthotist—especially during growth spurts—are critical to its effectiveness.

The optimal results in treatment of scoliosis are achieved when modern Chêneau type braces that address the three-dimensional aspects of scoliosis are used in conjunction with Schroth PSSE.

It was concluded that: